Martin and Jenny were married in 1980 and we always wanted a dog however, due to both working full time, it was not appropriate for us to have a dog until Jenny stopped working with the arrival of our first child Anona (Nonie)  in 1985.

In 1985 we acquired our first Dobermann ‘Lady ‘who came to us from Dobermann Rescue at around 3 yrs of age. She had been used for breeding and ended up in rescue shortly after having (or maybe loosing) a litter, evidenced by a very ‘saggy undercarriage’. She was a lovely bitch but could be a little scatty so we decided another Dobe would be good for her.

We kept in touch with Dobe Rescue and were hoping to re home another bitch as by this time our second child, Thomas, had arrived (1986).  With two small children, we thought a male might be just too much.  Rescue however, were keen for a family home for Jason, an 18 month old male who had been found abandoned in Birmingham. He was not doing well in rescue and they felt he needed a family environment. Jason had been found in January, tied up in a factory a week after it had been closed. When Jason arrived he was seriously underweight, he had cigarette burns on his body, his ears had been chopped (we assume to make him look fierce as he had been a guard dog in the factory) his ears had never healed properly. He had very poor skin and coat, in fact he was virtually bald and covered in scabs when he arrived. When we first saw him Jenny just cried and thought can he take any more?  However he was such a fighter and slowly but surely he picked up and taking him in was the most rewarding thing we have done.  Jason joined our family and he rapidly dispersed any concerns we had of having a male Dobe and children. He was the most fabulous, gentle boy, despite his cruel upbringing.

Jason proved to be a most reliable and trustworthy dog who loved and was loved by both our children. We sadly lost Jason at 5 yrs of age due to cancer however we are indebted to him for our love of Dobes today.

After losing Jason we had our third rescue Dobe, he had been named ‘Fang’ by the children of a Policeman who had found him as a puppy wandering the streets in Leamington Spa (he had been hit by a car and had a tooth missing hence his name!).  He too proved to be a wonderful dog, but like Jason we lost Fang to cancer at 5 yrs of age. Lady also contracted cancer but we lost her in her tenth year.

By now the children were growing up, and as a horsey family, were busy showing and competing in both Working Hunter and Lead Rein show pony classes. Nonie had her first pony when she was just 2.5 years old and she and Thomas were active Pony Club members!

We enjoyed the showing side of horses so much we thought we would like to have a Dobermann to show so we purchased the ‘pick of litter’ bitch puppy from Paul and Lyn Rock Othertons Lady Minister (Gem) was our foundation bitch for the Dobes we have today and so the story of Martifers (Martin and Jennifer) Dobermanns began.

It  took us several years to  actually get into the ring,  Sadly we did not ever quite make it with Gem as we were  so busy with children competing and not organised enough  to get dog show entries done, at horse shows you can often enter on the day!

We had a 2 litters from Gem, and from her first litter we initially retained a boy to show however another boy was returned to us and we could not bear to part with Harley again, so foolishly kept both Dewie and Harley. Having litter brothers  obviously was not going to work both being  entire males  not without much effort and a certain amount of risk with two children in the house, so in order to keep them happily living together they were both castrated but sadly that then meant as castrated males we were  not able show them.  A price we were prepared to pay in order to keep them both.

Gem had a second litter, we retained a bitch Matilda (Grand Moff Tarkin of Martifers) but her show career never took off due to being kicked in the mouth by a horse as a puppy, causing her to lose two front teeth making her unsuitable for the show ring.

Our luck then changed, Matilda provided us with our first show dog from her first litter Jester (Martifers The Joker) who was by Remesca Best Kept Secret at Mavson. (Mav).

With much help from Mav’s owners  Steve and Tracy Bostock we made it into the ring with Jester., he was  awarded a JW,  and then a RCC in junior  followed by a CC and  a further RCC  of which we are immensely  proud. Technically a very correct dog he did not really like being in the ring, so lacked the sparkle needed to get the 2 CC’s he needed to become a Champion. We kept telling him he only needed to smile twice more at the judge and he could retire but that was not to be, although he will always be a Champion to us!

We had two further litters from Matilda, we retained Holly (Martifers Dancing Queen) from her second litter. She did well in the ring qualifying for Crufts on several occasions, but we did not breed from her, something we do now regret. She qualified for Crufts as a veteran in 2013 so has come back into the ring after a 5 yr career break!

Matilda’s third and final litter provided us with Jake (Martifers Stop The Press) who has also had a successful career and has been awarded 1 RCC. He loves it in the ring (unlike his half-brother Jester) but is a large boy at 29.5 inches and 46 + kg , so  he is not to all judges tastes, however we love him as he is and  would not change a thing!  Jake was used at stud and we have his daughter the lovely Darcie (Perfect scoundrel at Martifers).

Jake’s litter brother Martifers Breaking News (Wesley) went to a wonderful showing home  and has had an illustrious show career with many Bob in Open Shows and qualifying for Crufts on numerous occasions.   He has done fewer Championship Shows than Jake and has not been given the accolades he so rightly deserves but we are very proud of him and very grateful to Kim and Alan who have given him the best home any breeder could ever want for a puppy.  Indie (Jake and Wesley’s sister) joined her brother with Kim and Alan when their old Dobe passed away. We had stopped showing Indie however she too has gone back into the ring and is having much success with Kim. 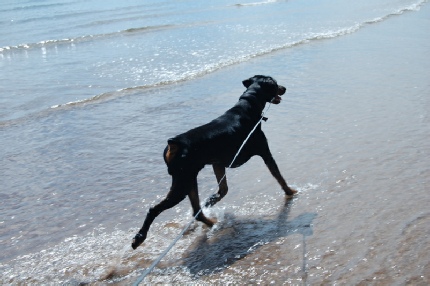 Our beloved Jester, to whom we owe so much.